South Sea cultured pearls are large and breathtaking beautiful. They are known for their rarity and especially for their size, which can range from 8 to 18 mm – occasionally even larger – having a thick layer of nacre. They are also prized for their rare, attractive golden colors and variety of shapes, such as rounded, oval, button and baroque. Perfectly round or drop shapes are especially rare and therefore more sought after.

South Sea cultured pearls, which display color variations ranging from white through cream, champagne through yellow and all shades of gold, descend mainly from two varieties of the Pinctada Maxima oyster: the gold-lipped and grey-lipped. These pearls are cultured along the divide between the Indian and Pacific Oceans, the best-known white pearls of this type being harvested along the coast of eastern Malaysia.

These pearls are notably larger than the “average” pearls, and are stunningly smooth and round. They are likely the rarest and most extraordinary pearls to be found in jewelry.

To produce the South Sea pearls, pearl farmers implant beads made of mother of pearl in the hopes that the conditions, and a bit of luck will allow for a perfectly round, lustrous, clean, and beautiful South Sea pearl.

The conditions for Pinctada Maxima are perfect in Malaysia because the water is clean the temperature is perfect, to create beautiful south sea pearls.

Originally, Japanese farmers adopted the term Keshi to describe these tiny self-nucleated pearls that had grown by accident and were often found inside mollusks at harvest time. Today ‘Keshi’ cultured pearls form as a result of a bead-nucleus rejection during the cultivation of a saltwater pearl. They usually display an odd, baroque shape. ‘Keshi’ pearls have a nacreous layer structure and are considered to be cultured. ‘Keshi’ cultured pearls can grow to quite a size in the South Sea and Tahitian varieties.

Keshi pearls are quite unique in the way they are formed, when compared to the standard method of pearl formation.

There are two ways that the Keshi pearl can form, none of which has to do with the “usual” process. The first way that the keshi pearl can form occurs when the oyster rejects and spits out the substance – the nucleus – before the development of the pearl has had the opportunity to finish. The second possibility is that the nucleus fractures and forms two separate pearl sacs – that is, circles of nacre – neither with a nucleus. Eventually, one or two nucleus-less pearls will usually form.

Keshi pearls – means poppy seed in Japanese – the ones sold by Mutara are saltwater pearls.  Keshi pearls also come in a variety of different colors and shades, and are known for their luster and uncommon orient. This is a result of their composition consisting of solid nacre. As the nucleus is eventually expelled by the oyster before the pearl is actually formed, the keshi pearl consists entirely of nacre.

Though this is true, keshi pearls are not given the classification of being a natural pearl. The reason is that keshi pearls are actually a bi-product of the culturing process, and not something that happens naturally.

The South Sea Keshi, pearls are considered to be much more exceptional and infrequent. The reason for this is that South Sea pearl farmers now x-ray their oysters to see whether or not the nucleus is still inside, or if it has been expelled. Should an oyster be found which has expelled its nucleus, it is re-nucleated before a keshi pearl would have the opportunity to develop. Thus the keshi pearls have become even more rare than they once were.

Still, keshi pearls remain popular as they are made of solid nacre and therefore usually have quite a bright luster. Their variable shapes are frequently considered quite desirable to jewelers who wish to design something unique and innovative. 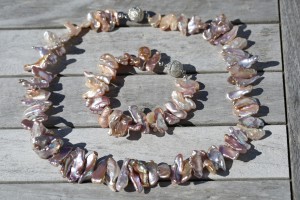 This website uses cookies to improve your experience while you navigate through the website. Out of these, the cookies that are categorized as necessary are stored on your browser as they are essential for the working of basic functionalities of the website. We also use third-party cookies that help us analyze and understand how you use this website. These cookies will be stored in your browser only with your consent. You also have the option to opt-out of these cookies. But opting out of some of these cookies may affect your browsing experience.
Necessary Altid aktiveret
Necessary cookies are absolutely essential for the website to function properly. This category only includes cookies that ensures basic functionalities and security features of the website. These cookies do not store any personal information.
Non-necessary
Any cookies that may not be particularly necessary for the website to function and is used specifically to collect user personal data via analytics, ads, other embedded contents are termed as non-necessary cookies. It is mandatory to procure user consent prior to running these cookies on your website.
GEM & ACCEPTÈR
Translate »